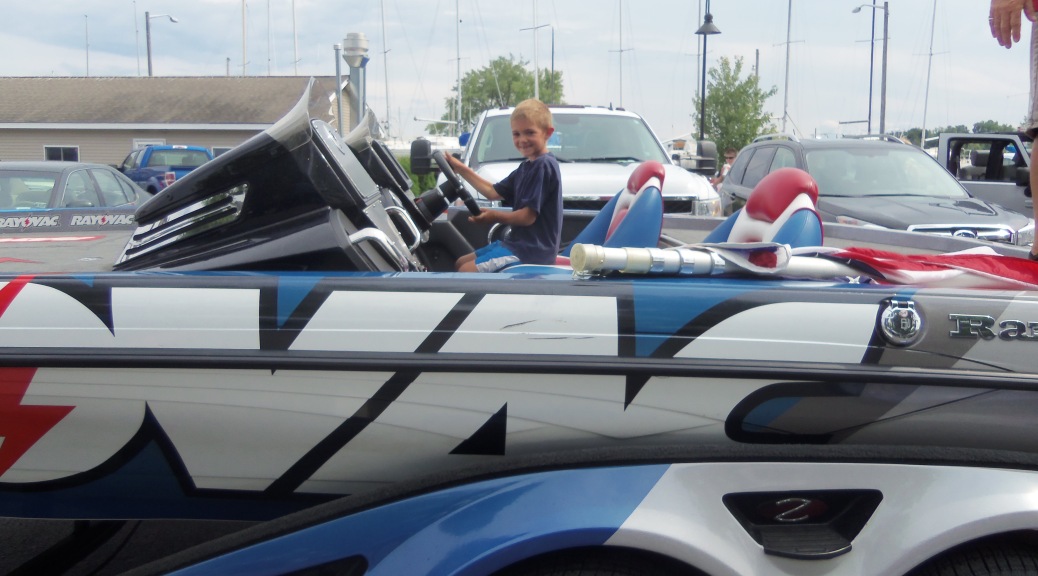 (I put together a fun quick summary video – if you just want to see it – skip down to the video at the bottom of the post rather than reading all this! Otherwise, ENJOY!)

I’ve never been IN a bass tournament, and I’ve never been TO a tournament weigh-in. So when I heard that the FLW Rayovac Series was coming to Lake Champlain (where we camp) I was so excited! DAD! MOM! CAN WE GO!!!??? Well, Plattsburgh, NY is quite a car ride away, so I never thought we would take time away on a beautiful FISHING Saturday to actually go.

So IMAGINE my surprise when my Dad said “hurry up and eat your lunch – we are taking the BOAT TO PLATTSBURG for the 2 pm final weigh-in!” It was like my birthday and Christmas both came early.

We all jumped in the boat with a friend (hey, Matt), took a quick “boatie” (that’s a selfie on a boat), and we were OFF. 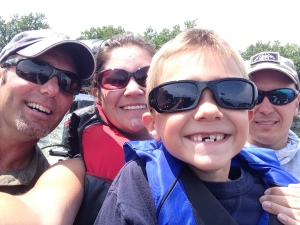 (Excuse the missing teeth…it’s tough to be six. And eat corn on the cob at the moment)

We zoomed across the lake and made it just after weigh-in started. I met SO MANY wonderful bass pros and co-anglers! One of the guys from FLW gave me an Evinrude Motors  hat. Thanks!

Then I learned that they put the bass in these big bags to carry them and keep them alive until they can be weighed. And there are these tanks all along the way and at the end. They use the tanks to give the fish fresh water. How nice?! 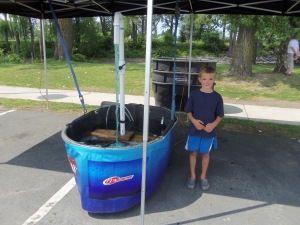 One by one the anglers went across the stage and weighed their five fish. If they had enough to be first, they sat in the “hot seat” under an umbrella to let people know they were #1. 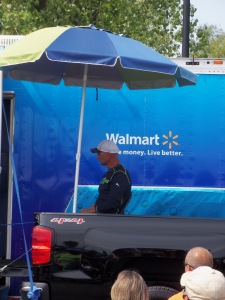 Then the winners were announced. It was very exciting and I got to meet lots of great people!

Destin DeMarion (@DestinedToFish) was very, very cool – I want to fish with him someday. 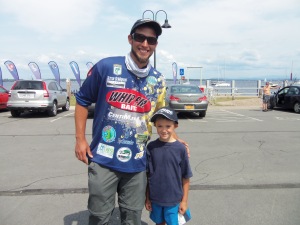 Mike McDonald gave me all sorts of pointers as he’s been fishing for years and told me that the white chatterbait he used was key (they he GAVE it to me – but don’t tell the FLW guys – he wouldn’t give it to them!!!) 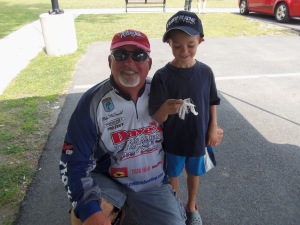 Then I met Cory Johnson – he was really nice too and we talked about our favorite lures. When I said I had never fished the type of jig he happened to win this one on, he went all the way to his boat to get one for me! What a great guy! 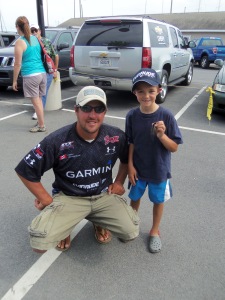 Derek Bigford told me he was also a gym teacher and loved kids so I was happy to chat with him about how I’m helping kids get out and enjoy the outdoors. 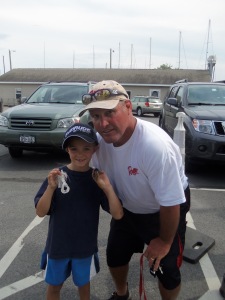 Finally, I met the guy who won first place in the co-angler division. He won a BOAT!!! He looked kinda young so Mom asked him about his age. HE’S ONLY 16!!!!! That’s 10 years older than me! And he won a boat! He’s just a kid too! Wow!!!! Congrats Zachary Francis – I’m sure we will be seeing a lot more of you on the pro side and maybe WE can go fishing together too! 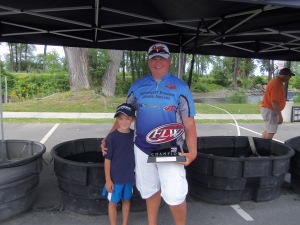 Then it was time to head back. Once the awards were announced, no one really stuck around for very long. I think it was a LONG three days for them. Wow. 15 little fish…and all this! It was so exciting!

Check out the video of my trip and first weigh-in!!